Reverend James Lawson returned to Vanderbilt University for the April 7 launch of an institute that continues its commitment to achieving justice and equality through nonviolent movements and strategies.

“This institute will help Vanderbilt ‘be on the map of the world’ for the type of social change – personal and social transformation – that will save the race, the human race, that is, and save the age in which we let’s live,” Lawson said. “We don’t do anything ordinary here. We are not engaged in something we can see, but the possibilities are endless. I am so grateful for this moment.

The James Lawson Institute for Research and Study of Nonviolent Movements, a cross-institutional collaboration between the Divinity School and the College of Arts and Science, will advance evidence-based research and nonviolent change while preparing the next generation of leaders, humanitarians and communities. organizers. Lawson, one of Vanderbilt’s most revered alumni, played an influential role in the peaceful protests against segregation in the 1960s by training Nashville students in the principles of nonviolent change.

Watch: The launch of the James Lawson Institute for Research and Study of Nonviolent Movements

Chancellor Daniel Diermeier paid tribute to Lawson’s deep and continuing legacy in his commencement address Thursday at the Student Life Center. “For more than four decades, James Lawson has brought the same moral courage and nonviolent strategies to bring about positive change for workers, immigrants, women and members of the LGBTQ community,” Diermeier said. “He remains an unstoppable defender of justice and a more perfect union. He continues to beg us to engage with each other in a message of love, not hate. And it creates opportunities where we can cherish our common humanity at a time of deep polarization. At a time when these virtues are often overlooked or deliberately ignored, his message carries special weight, inspiring others to follow in his footsteps. 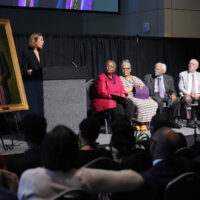 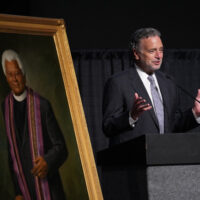 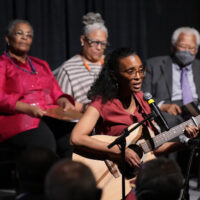 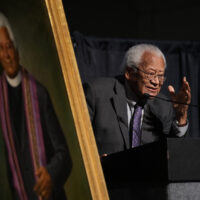 John M. Seigenthaler, who has close historical ties to Lawson through his father, the late John L. Seigenthaler, delivered a keynote address. “Reverend Lawson was the architect, the father, of the nonviolent movement in this country. Along with students from Fisk, Tennessee State University, and American Baptist Theological Seminary, he believed he could make a difference, and he did,” Seigenthaler said. “He taught these students the philosophy of nonviolent protest, and he instructed the students to practice and prepare for sit-ins. They staged what it would be like, before leaving, to be humiliated, beaten, pushed around when they were seated at the lunch counters. In many ways, he was teaching them to turn the other cheek. That’s what Jim Lawson did during the protests. He turned the other cheek, and that’s what he taught the students to do: reject hate and disarm attackers with love. A revolutionary concept, a radical concept.

Seigenthaler urged audiences to make sure the true story of the movement is told. “We are in the presence of a man who changed the world,” he said.

C. Cybele Raver, provost and vice chancellor for academic affairs, noted that Lawson’s teachings on the power of nonviolent movements have particular impact for current times. “I think back to the summer of 2020 when hundreds of thousands of Americans and people around the world came together in nonviolent resistance in response to the injustices done to George Floyd,” Raver said. “Research shows that 93% of the nearly 8,000 racial justice protests this summer remained nonviolent. And I think it’s because Reverend Lawson communicates so deeply what we understand in our hearts as well as what we understand from our scholarship. Nonviolent protest is essentially not an expression of anger – although people can be angry – but an expression of hope in the belief that there is opportunity and progress to be made when we raise our voices together. .

Lawson expressed deep gratitude for Vanderbilt’s establishment of the institute and the leadership of those involved in the launch, including Emilie Townes, dean of the Divinity School and professor emeritus of womanist ethics and society; Phillis Sheppard, Institute Director and Professor E. Rhodes and Leona B. Carpenter; and John Geer, Ginny and Conner Searcy Dean of the College of Arts and Sciences.

/Public release. This material from the original organization/authors may be ad hoc in nature, edited for clarity, style and length. The views and opinions expressed are those of the author or authors. See in full here.
Share. Twitter Facebook Pinterest LinkedIn Tumblr Email