Members of the committee include representatives from the Prime Minister’s Office, Ministry of Finance, Ministry of Communications, Ministry of Economy and Industry, Israel Innovation Authority, as well as various offices within the Department of Justice, including the Cyber ​​Unit of the State Attorney’s Office. and the Privacy Protection Authority.

In one letter dated October 13, 2021, and first cited by ynetSa’ar wrote that the committee would be tasked with “formulating measures and actions to bridge the ever-widening gap between technological developments and existing regulatory and legal arrangements in Israel, and to address the negative social influences of various phenomena. inherent in this gap”. .”

The development comes as Facebook was back in the headlines in recent weeks following high-profile whistleblower testimony that shed new light on the company’s questionable practices, and a global six-hour outage. hours on Facebook, Instagram and WhatsApp which angered governments. and regulators around the world. Whistleblower Frances Hauge told Congress this month that Facebook prioritizes profits over the public good, fuels division, harms children and needs to be regulated, sparking a new conversation about the social media company and its unregulated global reach.

In an interview last week, Dr. Tehilla Shwartz Altshuler, senior fellow at the Israel Democracy Institute and head of its Democracy in the Information Age program, told The Times of Israel that while regulation will take time, it is inevitable given the immense power of Facebook. .

In his Wednesday letter, Sa’ar cited advanced developments in new emerging technologies such as artificial intelligence (AI), cloud technologies, blockchain and digital currencies, virtual reality (VR) and IoT. (the Internet of Things), and stated that “the growing gap between law and technology means that the interests of the state, its economy and individual rights can be harmed and damaged irreversibly, as long as ‘they do not adapt the legal and regulatory provisions to the constantly changing reality’.

The Minister of Justice called on the new committee to make recommendations regarding legislation relating to social networks, trade in personal data and artificial intelligence.

He wrote that the negative aspects of social media networks – online incitement, misinformation, anti-Semitism, terrorism, manipulation of democratic systems and effects on children and adolescents – were “far reaching” and “clearer by the day. “, while the regulatory frameworks on the activities of these companies were “almost non-existent”.

Personal data, on the other hand, was “the new fuel” and the “phenomenon by which different entities, mainly international social media companies, collect data about each of us, process it, exchange it and use it to their needs, present significant threats”. and challenges alongside the opportunities and new services they provide for the public good,” the letter read.

While artificial intelligence serves as the basis for “revolutionary new technology in our time”, there remain significant questions about the threat to privacy rights.” Sa’ar pointed to Western world regulations such as The law on artificial intelligenceand said no such action had ever been taken in Israel “on this important industry”.

The committee “will explore the appropriate balance between encouraging innovation and technological developments in which Israel excels, and the need for smart and measured regulation that will minimize risk and negative expression,” Sa’ar wrote. Committee members will hear from local and global experts, relevant Israeli and foreign technology companies, non-governmental organizations and the public.

The Minister of Justice said he intended to work to “strengthen international cooperation in order to promote effective regulation of large technology companies”.

Separately, Channel 12 reported last week that Communications Minister Yoaz Hendel was forming a team of Israeli experts who would examine measures aimed at curbing global social media companies and possibly seek to hold Facebook legally accountable for posts on its platform. . The team would also seek to compel Facebook to reveal its policies on censorship, banning and how posts are placed in its algorithm.

Currently, when content or users are removed from the platform, Facebook does not have to provide details explaining the move. 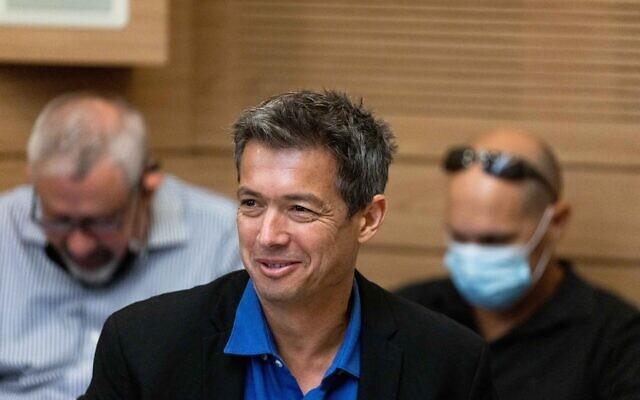 MK Yoaz Hendel during a meeting of the Arrangements Committee at the Knesset, June 9, 2021. (Olivier Fitoussi/ Flash90)

The proposed measures also include holding social media giants accountable for any incitement or defamation posted on their platforms, which would be virtually unprecedented worldwide, according to the report. Facebook and other social media sites are currently not legally responsible for false or harmful content that appears on their platforms, unlike newspapers and other traditional publishers.

Facebook has come under fire in recent years for failing to sufficiently curb hate speech, incitement and misinformation. But Facebook doesn’t typically ban misinformation outright on its platform, instead adding third-party fact checks to debunked claims. The two exceptions relate to elections and COVID-19.

According to the report, officials will try to get Facebook representatives to talk with them to find a solution, before any progress is made with the proposed measures. The idea would be to urge Facebook to take its own steps to ensure greater transparency and accountability in its operations, or face government-imposed measures.

The planned measures, which must be finalized within three months by Hendel’s task force, could apply to all social media sites, according to the report.

TOI agencies and staff contributed to this report.

The climate crisis and responsible journalism

As an environmental reporter for The Times of Israel, I try to convey the facts and science behind climate change and environmental degradation, explain – and critique – official policies affecting our future, and describe the Israeli technologies that can be part of the solution.

I am passionate about the natural world and discouraged by the dismal lack of awareness of environmental issues shown by most of the public and politicians in Israel.

I am proud to do my part to keep The Times of Israel readers properly informed on this vital subject – which can and does lead to policy change.

Your support, through your membership in The Times of Israel community, allows us to continue our important work. Would you like to join our community today?

Join the Times of Israel community

Already a member? Log in to stop seeing this